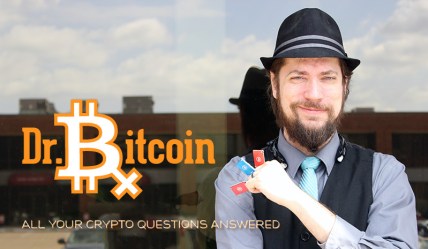 If you’re an American, last week was really weird. Without a doubt, most folks had reconciled with the fact that we’d have America’s first female president, only to have the apple-cart upset at the eleventh hour. We’re now ushering in the age of Trump, and that means a great deal of un-imagined consequences and uncertainty, which are generally not great things for markets.

So what does a Trump Presidency mean in the context of blockchain? I’ll try to examine this from a few perspectives, since both politics and blockchain are many-tentacled beasts.

With regard to what’s being affected, let’s break it down by these categories: “Bitcoin specifically,” “Crypto-currencies in general,” and “The Future of Blockchain Technology.”

Let’s start here: Looking to the night of the election, initial uncertainty expressed itself in a precipitous fall in the Dow Jones Index fund futures, as well as a corresponding explosion of value in Bitcoin. The DJI futures dropped by 1000 points, and Bitcoin blew up by around 50 points, at peak. Very quickly, though, as is common with Republican administrations, the markets found their footing and has since risen to record highs. 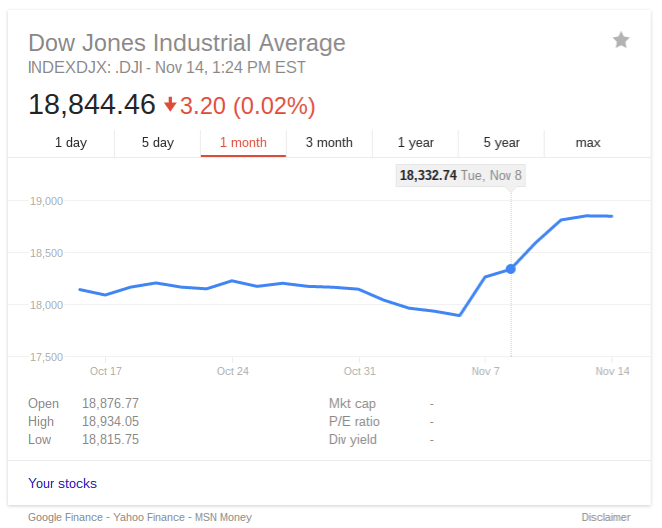 Meanwhile, Bitcoin has been subject to a more global set of value-inflencers, but one can clearly see the effects of the election and subsequent resignation on the market price in this 30-day view.

What does this mean long-term, though? Should we expect things to remain this stable in the next several weeks and months? I don’t think anyone can definitively say that or anything else. For one, Trump has yet to take office, but even more importantly, it’s still unclear how much of what he’s said is going to make it into actual policy. Trump has literally held every position on every issue during the course of the campaign. Many of the most bombastic campaign promises have now been repudiated in the first few hours after his winning the election.

One of the things likely to increase in uncertain times, particularly for the immigrant workforce, is foreign remittance. This, of course for Bitcoin, is actually good news. Via Justin O’Connell of Cryptocoin News:

Trump still wants a wall. That’s what he said earlier this week, when Trump revealed his plan to block remittances from illegal immigrants to their families – calling it “welfare” – he failed to demonstrate his understanding of the Internet and contemporary, borderless commerce. If it’s not remittances, immigrants in the US will figure out a way to send their money home if they want to do so. For now, it’s not going to be Bitcoin. But, if Trump does block remittances, you better believe that sooner than later increasing numbers of remitters will look into this blockchain technology. A Trump Administration would propose a rule mandating companies like Western Union Co to require customers prove they were earned legally.

Of course, Bitcoin does not (nor does any other cryptocurrency) require such a rule. It may pose an issue for “legitimate” (read: FinCen-compliant) Bitcoin sellers, since they’d be subject to the same rules as a Western Union. It would, however, be great news for the so-called “grey-market.” Individual Bitcoin-sellers that fall under the legal radar and outside their scrutiny due to low volumes could see their businesses increase, which will ultimately have a positive effect on market price as value transfers to the blockchain while in transit to its final destination.

CNBC and Juniper Research tend to agree. In a report issued this summer said as much:

“If Donald Trump becomes president of the U.S., there is the very real prospect of turmoil on world markets — the Economist Intelligence Unit ranks his presidency within the Top 10 global risks,” said Windsor Holden, head of forecasting & consultancy at Juniper Research, in a statement. “However, bitcoin trading would thrive in such an environment, at least until the impact on major fiat currencies becomes clear.”

This is where things start to get interesting, and really cool depending on your general level of geekery and political inclinations.

First, it’s important to note that while Bitcoin saw an election related bounce, most cryptocurrencies did not. This bolsters the general global perception that Bitcoin, like Gold, is a safe store of value in uncertain times. Bitcoin rose by 3%. Gold rose by 4%. Most cryptocurrency prices, however, were largely unaffected or at least non-correlative to Bitcoin.

“A page in the book of history has turned, and there is an opening to think about some of our problems from a new perspective,” Bitcoin enthusiast, Peter Thiel, who will serve on Donald J. Trump’s presidential transition team, told the New York Times after the election. “I’ll try to help the president in any way I can.”

Something that may help you navigate what the next four years may mean for other crypt-currencies, however, is the realization that cryptocurrencies are becoming more specialized, utilitarian and mature. For instance, take a look at the types of cryptocurrencies that dominate the top ten cryptos ranked by market capitalization: 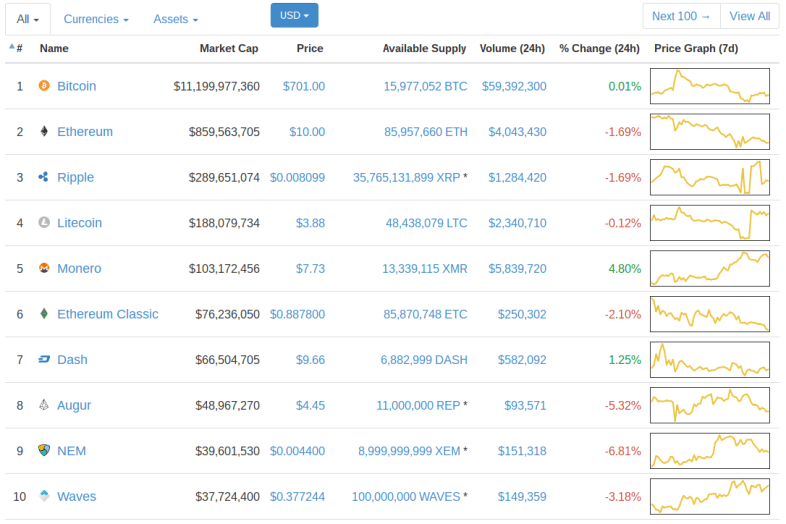 Bitcoin still reigns at the top of the chart, but following it you have…

If you look at the top-ten charts from a year or even six months ago, many of the blockchain projects were also-rans, simple tweaks to existing SHA-256 or Scrypt algorithms. Now you’re seeing a lot of different attempts at facilitating real application value via blockchain protocol. As such, these projects will be broadly affected by who’s in office, but more directly affected by the merits and pitfalls of their own governance and technology choices. One would do better to look at this new class of blockchain market entrants like startups, rather than competing cryptocurrencies.

This, of course, leads me to talk about

The Future of Blockchain Technology under a Trump Administration 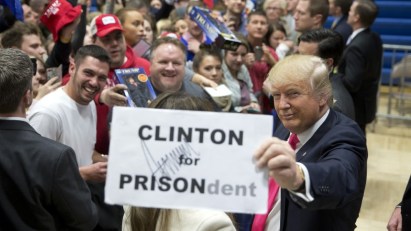 This is where my personal politics shine through a bit more than in these other categories. Personally, I’ve trended to a political philosophy that has in recent years been termed as Voluntaryist.

Voluntaryism is a philosophy according to which all forms of human association should be voluntary as far as possible (academics over the age of 25 may recognize this philosophy as being, basically, re-branded anarchism). This philosophy is in no part influenced by the things I’ve learned about blockchain technology and cryptocurrency.

Increasingly, technology has been solving societal problems before government has had a chance to put it’s pants on. As I noted in a recent IBM IoT Futurist twitter conversation, the privacy implications of AI in society are vast and need to be addressed immediately to have a real effect for consumers, however the agency governing such things (the FTC) has only one recorded mention of artificial intelligence in their history, and it was a largely ignored set of remarks at an esoteric symposium at NYU last summer.

Conversely, there are real, existential threats to the internet using new technologies (like the aforementioned IoT) that even the leaders in enterprise have no answer for that in-market, proven blockchain already present silver-bullet solutions for.

Meanwhile, you have Donald Trump making incoherent assertions on the campaign trail, and how he’s going to shut down the Internet to prevent terrorism. This is not the administration from which innovative technological solutions or regulation will flow. They’ll still be grappling with whether Trump should be allowed access to his Twitter account while Blockchain endeavors to solve some of the most difficult problems of our age.

In all of these cases, there is very little an administration of any stripe could do to impede the progress of these technologies once they’ve been unleashed upon the world, which is a bit of the beauty of blockchain itelf. These tend to be meritocratic, autocratic solutions to societal ills; that is to say, that if they work, they self perpetuate, and if they don’t work, they fail and are replaced by something that does work.

In short, regardless of who’s in charge, the world of blockchain broadly looks bright, indeed.

The post Ask Doctor Bitcoin: What does a Trump Administration mean for Bitcoin? appeared first on Mark "Rizzn" Hopkins.