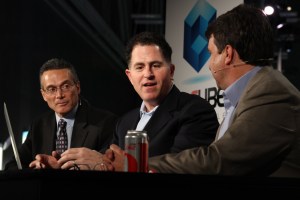 Michael Dell on theCUBE with John Furrier and Dave Vellante at DellWorld 2012.

Maybe I nicked this statement from someone, or maybe I come up with it, but a phrase I use a lot when I talk to people about Digital Autonomous Organizations is “.. the economy and the state are engineering problems, not political ones.”

What struck me from the Dell announcement around Bitcoin acceptance is this is reflective of a core belief in at least a version of this philosophy.

In late 2012, Michael Dell came on my show (theCUBE) to talk about the changes in the industry and at Dell, and had this to say:

“When I look at the big opportunities that exist in the world and the big unsolved problems, be they in medicine, in education, in energy or the environment, I think that these are problems that technology will solve.”

“I think about the innovation that’s occurred over the last couple decades that I’ve been in this industry where IT used to be this sort of back room activity with a couple of guys wearing pocket protectors involved in, and now you essentially can’t even run a business if technology isn’t involved.”

A few months after he said this on our show, he went on to take Dell private, a move that’s allowed them to go deep into bleeding edge technology moves like Bitcoin and 3D printing.

Dells moves in 3D printing have forced competitors to get serious about the business as well (like HP).

We might be at the knee of the curve here; Dell’s acceptance of Bitcoin just might push other major enterprise players to start thinking about Bitcoin in the same way.

[Originally posted by me to /r/bitcoin. Feel free to upvote it there if you like it.]